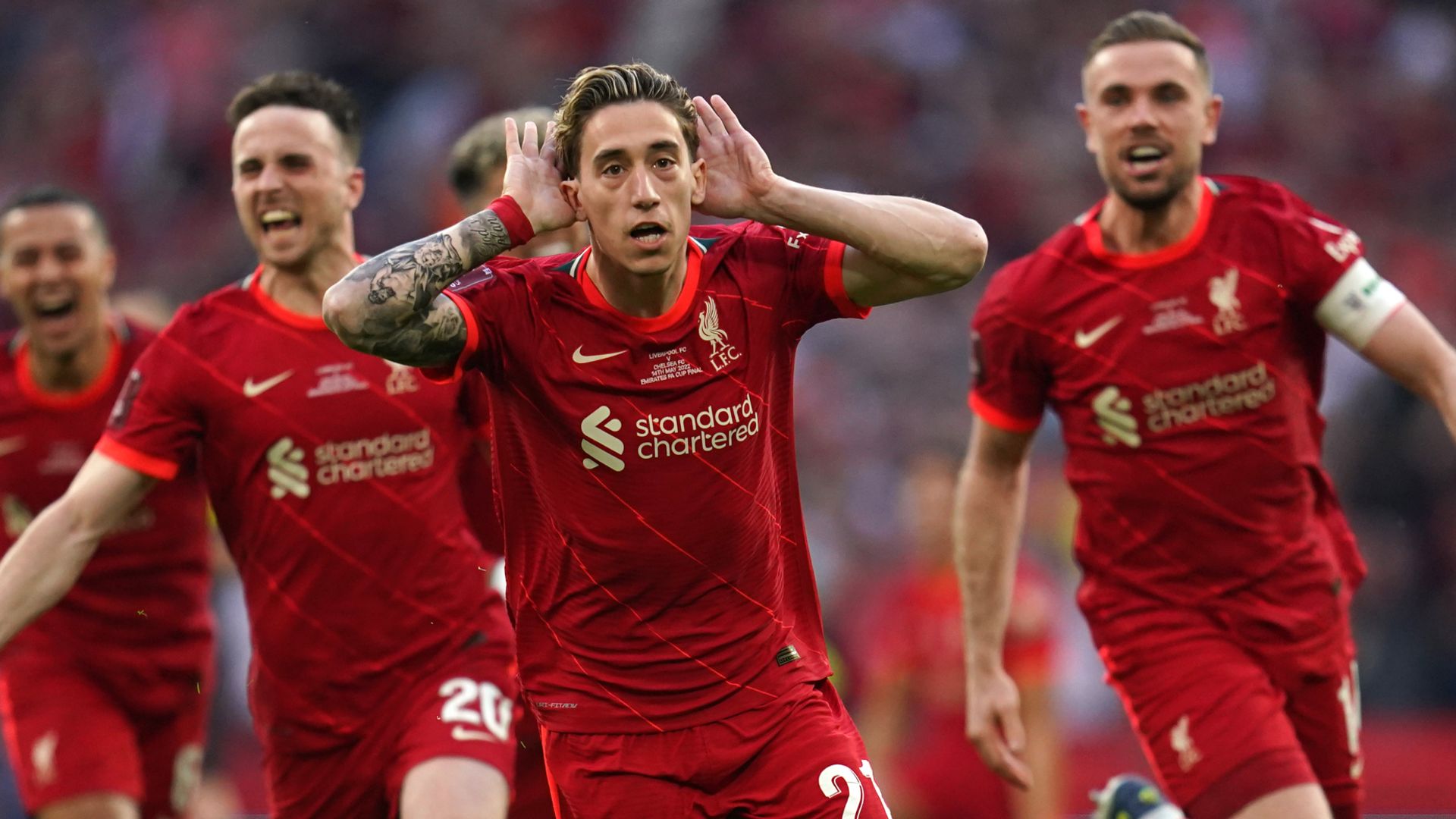 Liverpool completed a clean sweep of the domestic cups with another penalty shoot-out win over Chelsea at Wembley in the FA Cup final, with Kostas Tsimikas striking the decisive spot-kick after Mason Mount’s effort was saved by Alisson.

It had taken 22 penalties to separate the sides in February’s Carabao Cup final and while there were only 14 taken on this occasion, it was once again Jurgen Klopp’s side who clinched the silverware by the narrowest of margins, handing Chelsea a third straight FA Cup final defeat in the process.

Mount dropped to his haunches as Liverpool’s players and staff ran off to celebrate with their fans amid a fog of red flares – he has now lost six major finals at Wembley.

Earlier in the shoot-out, Sadio Mane – who scored the winning penalty for Senegal at the Africa Cup of Nations earlier this year – had missed the opportunity to clinch it for Liverpool following Cesar Azpilicueta’s strike against the post, but Tsimikas kept his cool to become the unlikely hero.

Liverpool’s success was tempered by injuries to Mohamed Salah and Virgil van Dijk, which could potentially damage their hopes of an unprecedented quadruple, with their Premier League pursuit set to continue on Tuesday at Southampton on Sky Sports and their Champions League final with Real Madrid on May 28.

But the scenes of wild celebration at the end on the pitch and in the stands suggested Liverpool were only focused on this moment.

The 141st FA Cup final, 150 years on from the first, had seemed unlikely to go all the way in the opening 15 minutes, as livewire Luis Diaz gave Trevoh Chalobah real problems during an electric start from Liverpool, but Chelsea gained a foothold and hit the bar through a Marcos Alonso free-kick during their own fast start to the second half.

The woodwork was struck twice in quick succession by Liverpool at the other end inside the final 10 minutes of normal time, with Diaz denied before Andy Robertson miscued a close-range volley.

With fatigue setting in through extra-time on a warm Wembley afternoon, extra-time saw the tempo drop, but the drama cranked up again in the shoot-out – and it was once again the red end celebrating.

How the penalty shoot-out went

Liverpool travel to Southampton on Tuesday at 8pm while Chelsea host Leicester on Thursday at 7.45pm. On the final day of the Premier League season, Liverpool host Wolves and Chelsea host Watford on Sunday at 4pm.

May 17 – Southampton (a) Premier League, live on Sky Sports Adama Traore: Barcelona re-sign forward from Wolves on loan until end of season with option to buy | Transfer Centre News Stripe vs. Plaid, IP litigation, what VCs really think about the downturn – TechCrunch

If I received a note from an investor stating, “although somber, this data is not meant to alarm you,” well,