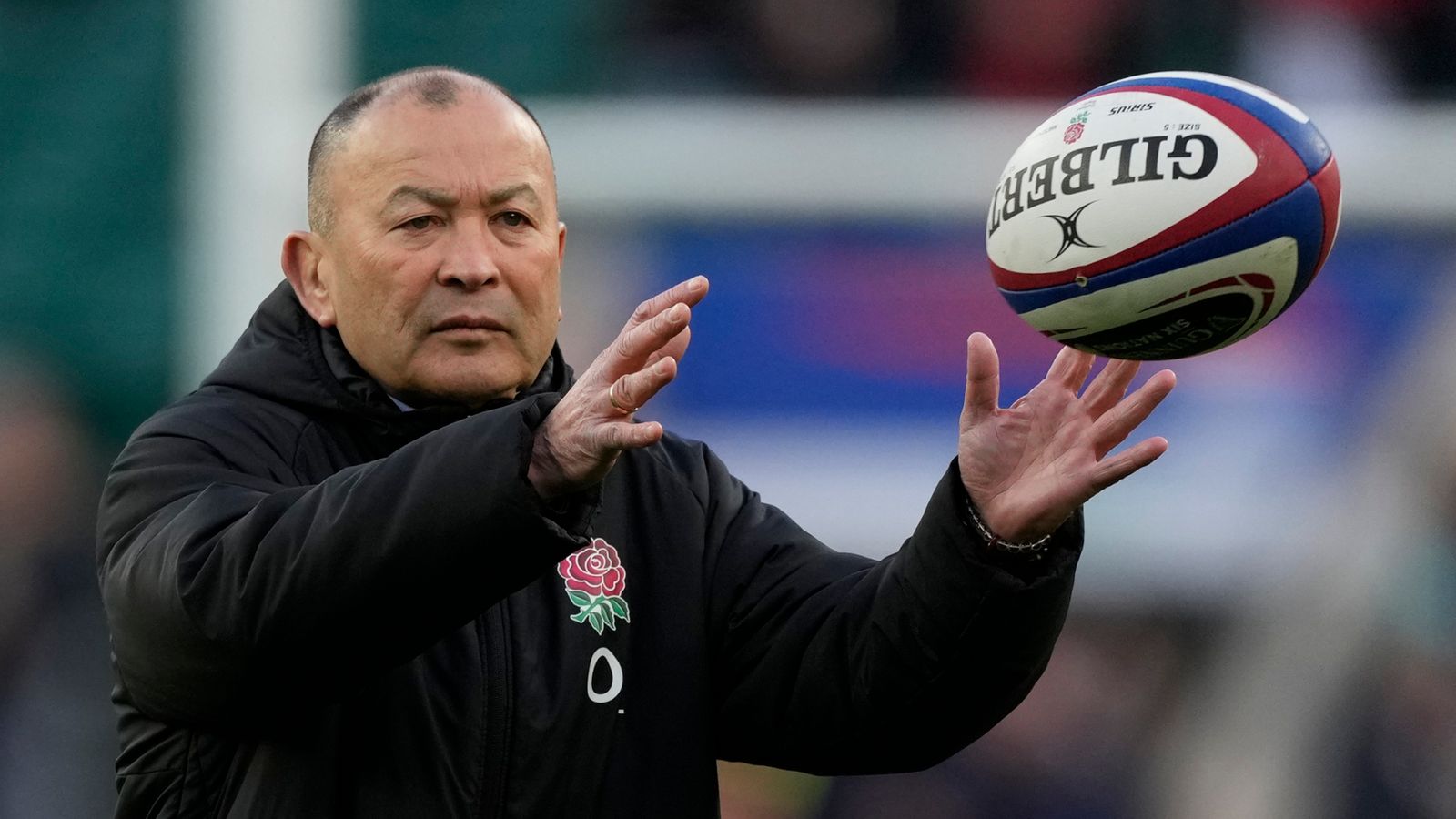 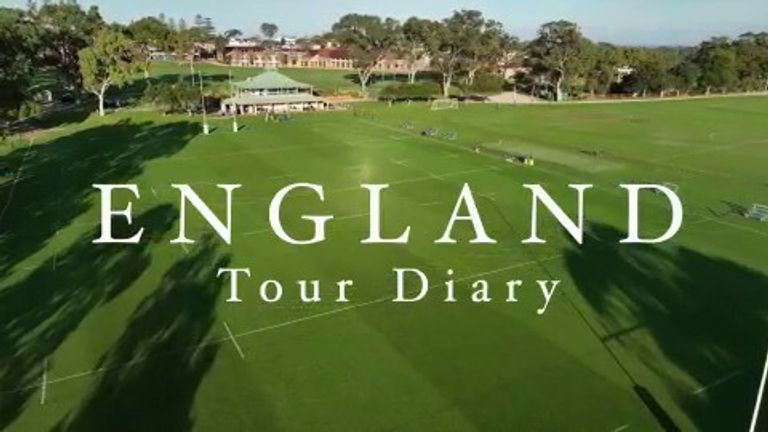 Go behind the scenes with the England Rugby squad as they tour Australia – Sky Sports has been granted special access to the team as they train in Perth.

Go behind the scenes with the England Rugby squad as they tour Australia – Sky Sports has been granted special access to the team as they train in Perth.

Eddies Jones’ England future is at stake heading into his team’s tour of Australia while World Cup champions South Africa await as a huge test for Wales, says Will Greenwood.

Both enter key Test Series’ as part of preparations for the World Cup later this year alongside Ireland, who take on New Zealand, and Scotland, who visit Argentina. 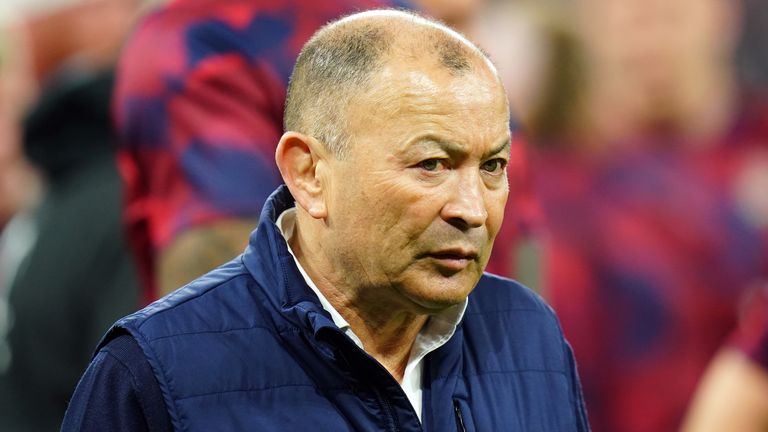 Will Greenwood previews the first Test between Australia and England in Perth and says that Eddie Jones’ job is on the line in the series.

Will Greenwood previews the first Test between Australia and England in Perth and says that Eddie Jones’ job is on the line in the series.

“For Eddie Jones, his job is on the line after disappointing Six Nations results. You go to Australia, I think with the support he has from the RFU and Bill Sweeney, come away with just one win from three and he’ll set sail for the World Cup.

“Come away with zero wins, which is eminently possible, and this debate continues to rage and therefore we stop focusing on the stuff that really matters which is what is going on on the field.

“Instability in sport is a killer for any team both on and off the pitch so it is huge. It’s such a long way from where they were in 2016, when Eddie came in post-World Cup disaster in 2015, won a first Grand Slam in 13 years, went to Australia, 3-0 series white-wash, an extraordinary set of results and a World Cup final in 2019.

“Just like the England cricketers have turned around under Brendan McCullum, to give the confidence to Jonny Bairstow to just go hit it, Danny Care ‘just go play’.

“It is a huge Test series for all four home nations. In the reality of potential future instability of all the four home nations, England are being scrutinised the most because of the epically-poor run they’ve had in the last two years.”

‘Nobody can name the England team!’ 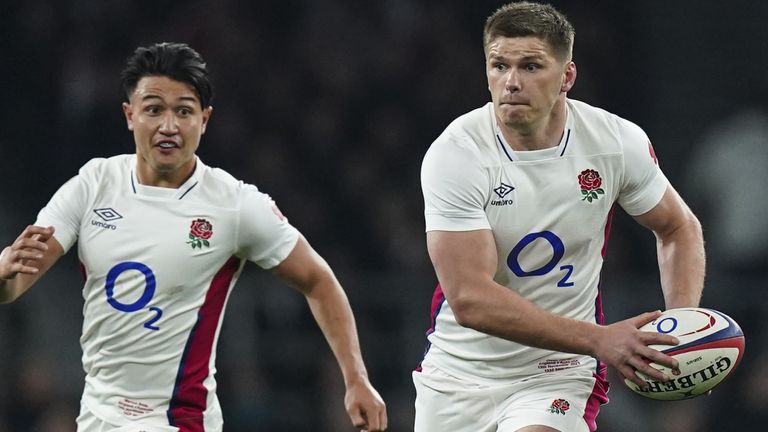 “I don’t think Owen Farrell will be captain, I think he’ll stick with Courtney Lawes who was his Six Nations captain. If Owen Farrell and Marcus Smith don’t pair up then blow me down with a pea-shooter, because the reality is I don’t think Eddie knows where else to go.

“I think the future at 12 is on Tour, I think young Fraser Dingwall from Northampton is fabulous.

“When there’s a crisis, Eddie has always sort of gone to Owen Farrell, clutch kicker, he’ll have to play at 12 because Marcus Smith won’t operate at 12. My view is it’s ‘or’ not ‘and’, Eddie sees it as ‘and’ not ‘or’, he’ll play them both.

“Who partners them in the midfield? Probably Joe Marchant, who has had a good run of form under Eddie. But in terms of other positions, this is where England are, nobody can name their team.

“You go into the French team and they roll off the tongue. The South Africa team playing Wales, you go ‘can I name them?’ and yes you can. With England, it’s throw the dice up in the air and see where they land.

“The really interesting thing is here, is Eddie ditched Danny Care in 2018, he ditched Billy, and he brings them back and they’re under pressure, if it goes wrong how much loyalty have they got to him?

“It’s an extraordinary Test series and Australia will be lying in wait. England are on eight out of eight against Australia, so Australia have some questions to answer.”

Can Ireland win in New Zealand for first time? 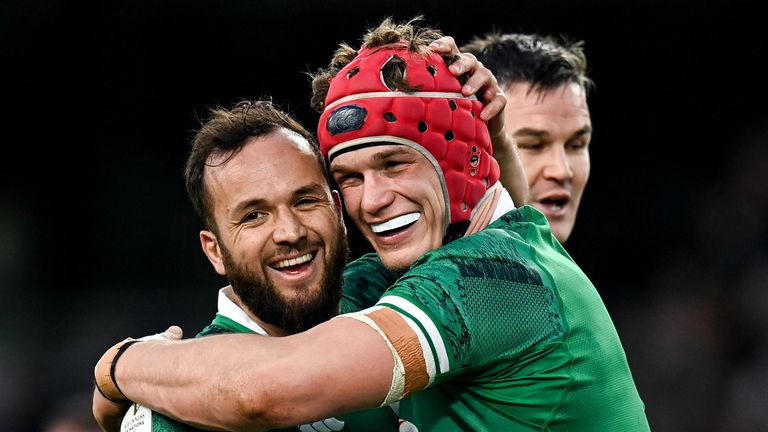 Will Greenwood previews the first Test between New Zealand and Ireland and discusses how to deal with facing the Haka.

Will Greenwood previews the first Test between New Zealand and Ireland and discusses how to deal with facing the Haka.

“The All Blacks have lost their last two, they haven’t lost three in a row since 1998, they don’t tend to.

“Ireland have won three out of the last five against them, but they’ve never won in New Zealand. We’ve seen the New Zealand Maoris, 32-17 against admittedly the Ireland second team, but then they picked up a couple of injuries, Mack Hansen the wonderful winger for Ireland won’t be able to play in the first Test.

“The way Ireland have been developing, where we said with England one win probably saves Eddie, for Ireland 3-0 is not a disaster if they perform well.

“If they can nick one win and say they’ve won in New Zealand they turn up like their sails are huge and they’re ready to push on to get past the quarter-final for the first time at a World Cup.”

‘Another massive test for Wales’ 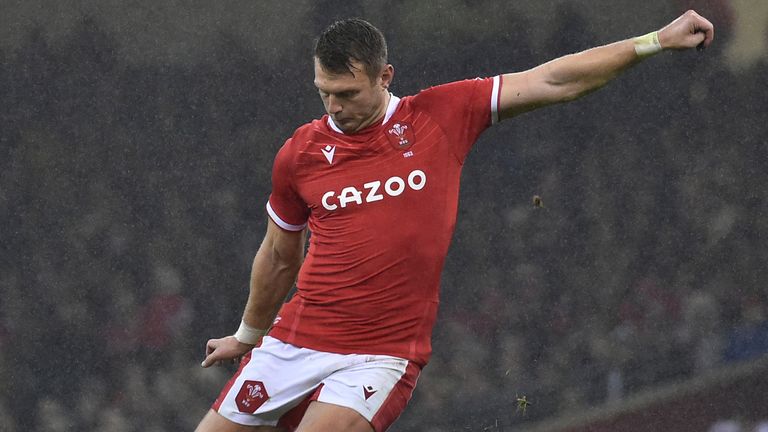 Will Greenwood says Dan Biggar will need to perform at his best if Wales are to have any chance of winning a Test in South Africa for the first time.

Will Greenwood says Dan Biggar will need to perform at his best if Wales are to have any chance of winning a Test in South Africa for the first time.

“Wales have played 10 and lost 10 in South Africa, just another challenge for the Northern Hemisphere crossing the great divide. Are we closing the gap?

“Wales have taken a few injuries, Alun Wyn (Jones) will pick up his 748th cap, he’s been playing since 1643, an extraordinary run of performances from that legend of a human.

“Dan Biggar will skipper the first Test. It will need Biggar’s brilliance up in the sky, his goal kicking will have to be on point.

“You always suspect on these tours, because of the ability of South Africa to bring another 6’5” 130kilo guy who happens to live down the road, you feel if you’re going to win one try and nick the first one, put the cat amongst the pigeons and see how it goes.

“Another massive test for Wales, they will be viewing it as if they can win one Test in South Africa, which they’ve never done before, it will be a great result.

“In Pretoria, it’s an absolute sell-out. They will expect their world champions to come home post-Lions in front of 50/60,000 people and put Wales to the sword.

“Wayne Pivac I think is a fabulous coach, I really do. He gets what he can out of a group of players.”

‘Scotland are on the up’ 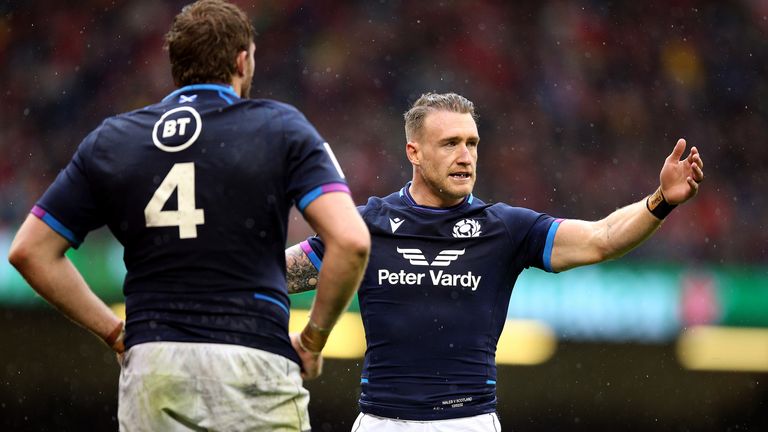 Will Greenwood says home advantage gives Argentina the favourites tag for their series against Scotland.

Will Greenwood says home advantage gives Argentina the favourites tag for their series against Scotland.

“Going back on home stuff, Argentina because of Covid have played 21 Tests away from home. They haven’t been home since 2019, they’ve been on the road more than the England cricket team!

“Scotland have won five on the trot against Argentina, but rested people. Finn Russell, Stuart Hogg, Chris Harris the center is also rested, Grant Gilchrist will take over the captaincy. Michael Cheika comes in as head coach for Argentina.

“I think again it would lie in Argentina’s favour, back home for the first time in three years, some cracking players, and Cheika taking over at head coach and wanting to make a statement early.

“For Gregor Townsend, I’m not trying to be defeatist, it would be amazing if they could win a series there. Argentina will start favourites but Scotland are on the up ignoring their last two or three results.” 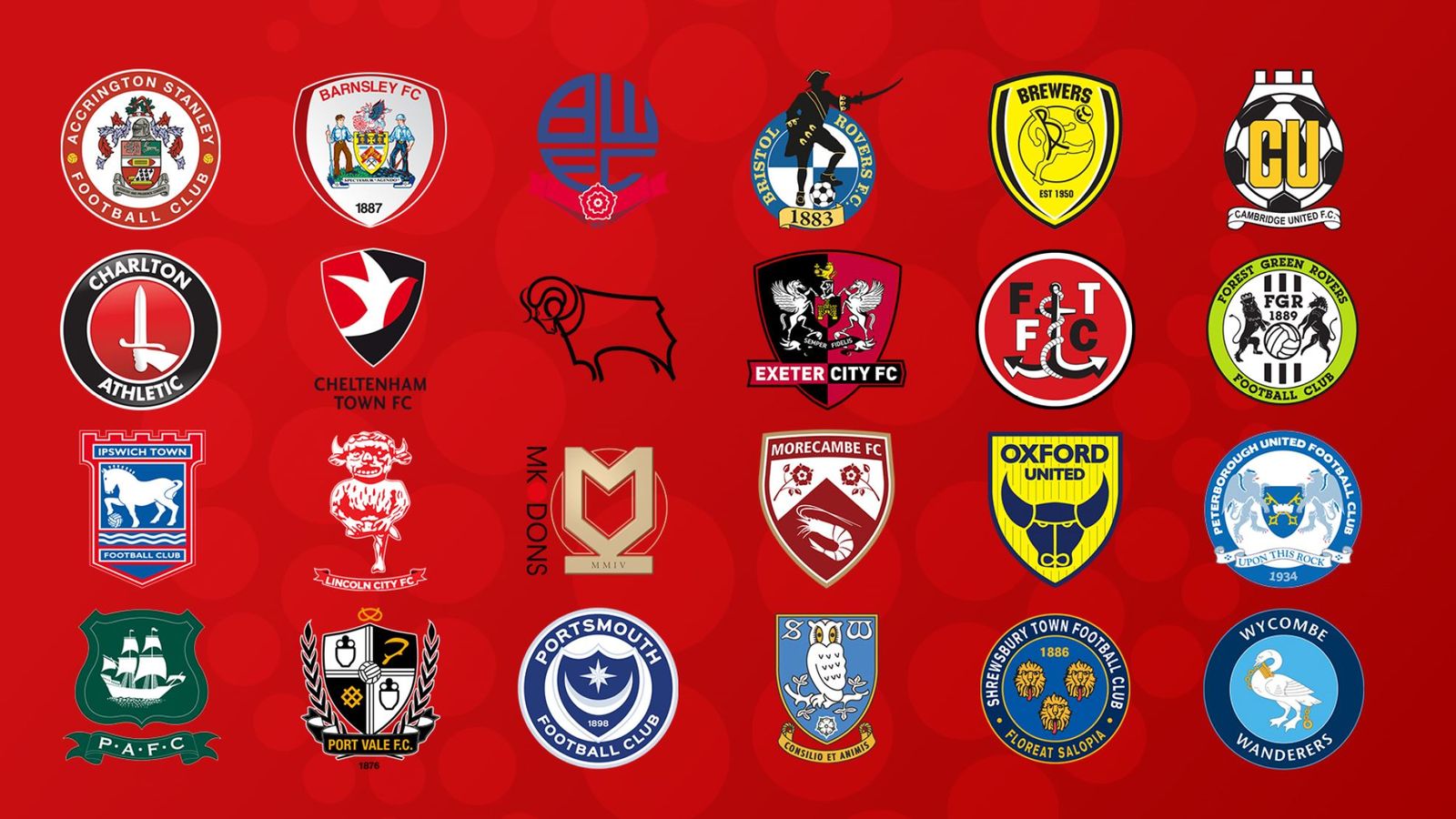 League One 2022/23 fixtures, dates and schedule: Derby vs Oxford and Sheffield Wednesday vs Portsmouth on opening weekend | Football News