Al Jazeera looks back at the careers of two of the most renowned footballers of their generation.

Cristiano Ronaldo and Lionel Messi will be playing their fifth, and probably last, World Cup in Qatar.

Argentina and Paris Saint-Germain player Messi, 35, announced in October that World Cup 2022 will be his last, while the 37-year-old Portugal and Manchester United player Ronaldo has yet to comment on his international future.

For more than a decade now, the football world has debated who is better. The discussion is likely to continue long after they hang up their boots.

As the two giants of the game reach the twilight of their careers, we take a look at their performances over more than 17 years of playing football at the highest level.

When it comes to their scoring record, Ronaldo is far ahead of his Argentinian rival.

The Manchester United star has scored 117 times, a record. Messi has 90 goals to his name.

Both players have one major regional competition at international level, with Ronaldo winning the European Championship in 2016 and Messi clinching the Copa America in 2021.

At football’s most prestigious event, Messi has played 19 matches, two more than his Portugese competitor.

Ronaldo again leads in the goal-scoring department with seven goals, one more than Messi.

However, between the two, only Messi has reached a World Cup final, at the 2014 World Cup in Brazil. The South American football giants lost to Germany in extra time 1-0.

There was some consolation for Messi as he took home the Golden Ball for the best performance at the World Cup in Brazil. In contrast, Ronaldo has reached the semi-final stage once, in 2006. 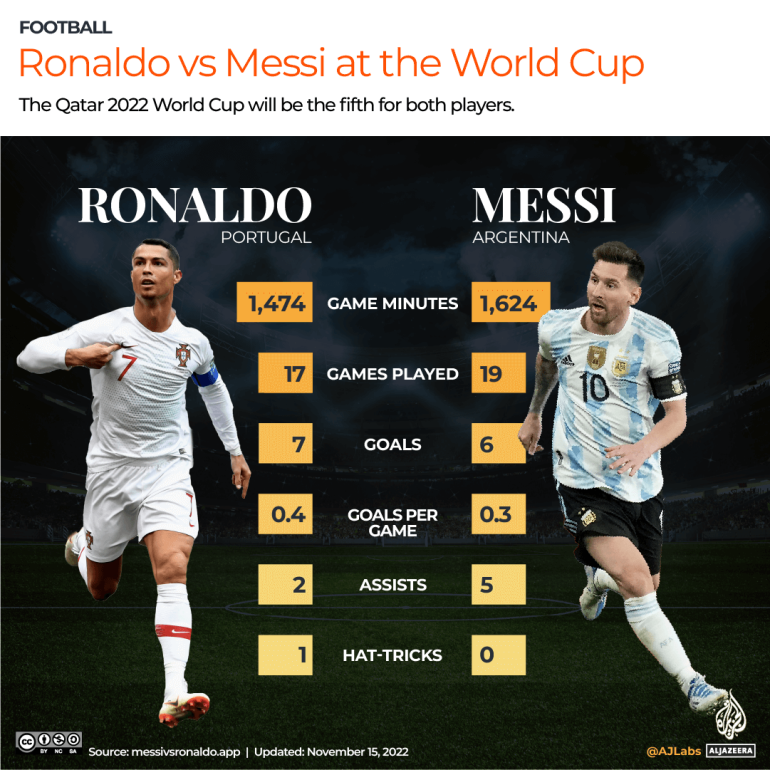 Ronaldo has scored 701 goals at all club competitions while Messi has 695 – making them the leading goal scorers at club level in football history.

But the Portuguese has played 100 more games than Messi, giving the latter a better game per goal average.

However, when it comes to assists, the 35-year-old Argentinian far outnumbers Ronaldo, with nearly 50 percent more than the Manchester United player.

Tiger Global believes India is likely to produce the highest equity returns globally, its partner Scott Shleifer said on an