Tom Brady takes his Tampa Bay Buccaneers to San Francisco this Sunday to face the NFL’s number one-ranked defense in the 49ers, while there is also a crucial NFC East showdown between the Giants and Philadelphia Eagles in New York.

As part of the Week 14 triple-header live on Sky Sports NFL this Sunday, the NFL’s best Eagles (11-1) go on the road against a Giants (7-4-1) outfit fresh from a tie against the Washington Commanders in their last divisional clash, without a win in three and desperately clinging on to an NFC wild card berth. The action at MetLife Stadium gets underway at 6pm.

From New York we then head all the way out to the west coast for the second game of the night, with the 49ers (8-4) hosting the Buccaneers (6-6) in a matchup of two quite contrasting quarterbacks. Although San Francisco’s top-ranked defensive unit will be hoping to tame Brady, the 45-year-old, seven-time Super Bowl winner goes up against 22-year-old rookie Brock Purdy, following Jimmy Garoppolo’s season-ending injury at the weekend. 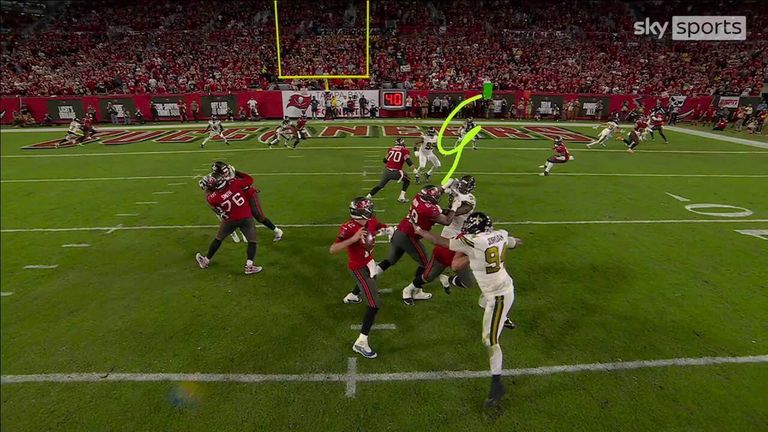 Purdy, who was taken with the very final pick of the 2022 NFL Draft – a position that has seen the player selected become affectionately known as ‘Mr. Irrelevant’ – was just four months old when Brady himself was drafted, while he had just turned two when he won his first Super Bowl title. Kick-off in Santa Clara for this one is at 9.25pm. Rounding off the Sunday night action, we join our friends at NBC for Football Night in America and Sunday Night Football, with the clash between the Los Angeles Chargers (6-6) and Miami Dolphins (8-4) at SoFi Stadium, with the two teams battling for playoff positioning in the crowded AFC conference – kick-off is at 1.20am, early on Monday morning. Highlights of the Los Angeles Chargers against the Las Vegas Raiders from Week 13 of the NFL season.

Highlights of the Los Angeles Chargers against the Las Vegas Raiders from Week 13 of the NFL season.

Elsewhere, the Week 14 action gets underway with the traditional Thursday night fare and a first trip of two out to Los Angeles to see the reeling Rams (3-9) host the Las Vegas Raiders (5-7) who, by contrast, have won their last three straight coming into this one. Watch all of the action live on Sky Sports NFL from 1.15am on Friday morning.

Finally, to close out Week 14, Monday Night Football sees Bill Belichick take his New England Patriots (6-6) on the road to Arizona where they’ll encounter the Cardinals (4-8) – live on Sky Sports NFL from 1.15am, Tuesday. Ransomware has hit 3,800 servers, but CISA says this tool might help