The world’s largest cryptocurrency has been languishing around $47,000, well below early November’s highs of nearly $69,000.

The malaise surrounding Bitcoin runs far deeper than its price.

The world’s largest cryptocurrency has been languishing around $47,000, well below early November’s highs of nearly $69,000. A look under the hood helps explain why: Trading volumes have dried up, futures open interest is plunging and the number of active addresses has stalled out.

Taken together, the data paint a picture of diminished animal spirits after Bitcoin peaked following the fall launch of the first U.S. futures-tracking exchange-traded funds. Dip buyers – a once-reliable fixture in cryptocurrency markets – have yet to meaningfully reemerge even after a 33% drawdown. Meanwhile, after billions of dollars worth of leveraged positions were flushed out in last month’s flash crash, new investors have yet to fill the void.

“There was a lot of leverage in the system in May and then in the lead-up to November,” said Jim Greco, a managing director at Radkl, a crypto-trading firm. “There could be a lot of people who got washed out and they need to be replaced by new capital.”

Trading activity in Bitcoin has trailed off as enthusiasm has ebbed. After trending lower for months, volume across exchanges clocked in at a mere $4.8 billion on Tuesday, data from Kaiko compiled by Messari show. That’s down from $13.1 billion a year earlier, and is well below the one-year average of roughly $9.2 billion.

Volume hasn’t broken above $10 billion since Dec. 4, when the price of Bitcoin plunged more than 20% in a matter of minutes in a display of the coin’s notorious weekend volatility. About $2.4 billion of crypto exposure, both long and short, was liquidated during the drop, according to data from Coinglass.com.

“We saw a number of U.S. funds, prop shops and hedge funds put risk back on basically into the last hours of the year, but this year what we’ve seen is volumes are relatively down as opposed to the beginning of last month,” said Aya Kantorovich, head of institutional coverage at FalconX. “I think what we’re seeing is still this question around, ‘Are we still risk-off or risk-on?’”

The futures market tells a similar story. After spiking to an all-time high of $17.4 billion in late October, open interest on Bitcoin futures contracts on the Chicago Mercantile Exchange is now about $10.6 billion — a 39% drop.

Fueling the run-up was the anticipation of the first U.S. Bitcoin futures ETF, which debuted in mid-October as one of the most-traded funds on record. However, enthusiasm quickly waned — after attracting more than $1 billion in just two days, assets under management in the ProShares Bitcoin Strategy ETF (ticker BITO) stand at $1.2 billion. 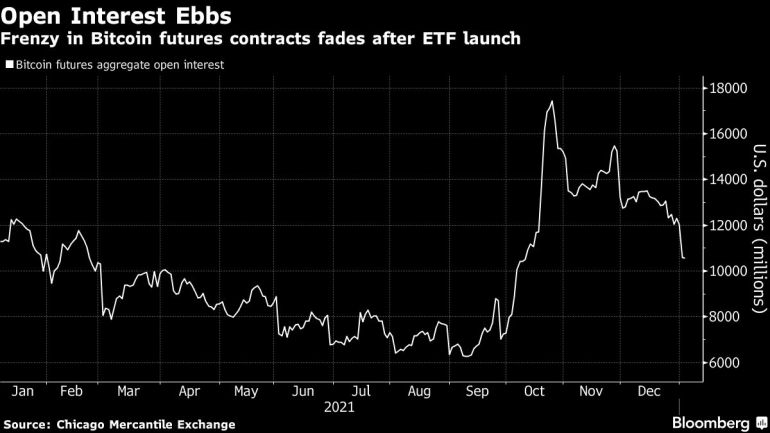 “The fund launch correlates strongly with increased CME open interest, as AUM increased rapidly in the first week from launch,” Sam Doctor, chief strategy officer and head of research at BitOoda, wrote in a note. Open interest “fell back recently to the pre‐ETF launch levels in the last week of December, although we expect OI to climb again heading out of the holidays.”

Amid the malaise, growth of active addresses — a gauge of trading activity — has also stalled out. The tally currently stands at roughly 971,000, down from 1.2 million a year ago, CoinMetrics data compiled by Messari show.

To Kantorovich, that could set the stage for a short, sharp liquidity squeeze similar to December’s flash crash.

“The less active addresses you have could mean the more assets stored in cold storage. The less tradeable Bitcoin, the more volatility you can expect on exchanges as liquidity across order books decreases,” Kantorovich said. “I think you could see a very swift, very short flash crash that deleverages the open interest in the market very quickly, similar to what we saw in December.”

Attacks in the peninsula may indicate that Ukrainian operatives are able to penetrate deeply into Russian-occupied territory. A spate of