Russia-backed forces controlled 60 percent of Luhansk before Moscow launched its invasion of Ukraine in February.

A Ukrainian official has said that Russian forces now control 80 percent of Luhansk, one of the two regions of eastern Donbas, and that hospitals and morgues in the occupied areas were “overcrowded”.

Serhii Haidai, head of the Luhansk Regional Military Administration, made the announcement on Telegram late on Wednesday.

“Since our troops withdrew from Kreminna, the share of occupied territories is at 80 percent,” Haidai said, referring to Russia’s capture of a small town in Luhansk on Tuesday.

Before Russia invaded Ukraine on February 24, the Ukrainian government controlled 60 percent of the Luhansk region. In recent days, Russian troops have renewed their offensive in eastern Ukraine after failing to capture the capital, Kyiv, in the north.

Capturing Donbas, where Moscow-backed separatists have been fighting Ukrainian forces for the past eight years, would give Russian President Vladimir Putin a badly needed victory two months into the war after the botched attempt to storm the capital. 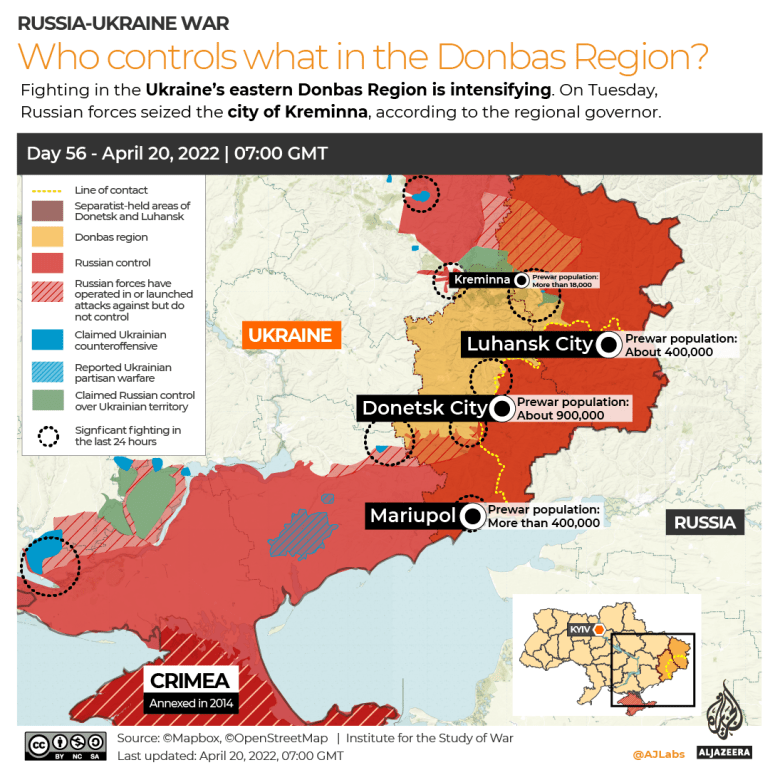 Comprising Luhansk and Donetsk, the mostly Russian-speaking region of Donbas is home to coal mines, metal plants and heavy equipment factories. Pro-Russian leaders there have declared two independent republics, which Russia recognised before launching its invasion of Ukraine.

Haidai said Russian shelling in Luhansk has been so intense that people could not leave their bomb shelters. And after seizing Kreminna, the invading forces were now threatening the towns of Rubizhne and Popasna, he said.

The two towns were now “partially” controlled by the Russians, he added in a separate post, but said that fighting was continuing and that the situation could change at any time.

“The Russians are constantly trying to break through [Ukrainian defence lines], but without success,” he said. Luhansk was now littered with the corpses of enemies, he went on to claim.

“Morgues and hospitals in the occupied territories are overcrowded,” he said, adding that Russians were also looting Ukrainian residences and taking away cars.

The Donetsk region, also part of the Donbas, has seen extremely heavy fighting as well — particularly around the port city of Mariupol, where thousands of Ukrainian fighters and civilians are holed up in a mammoth steel plant.

A Ukrainian posted a video plea on Facebook, urging world leaders to help evacuate people from the plant, saying, “We have more than 500 wounded soldiers and hundreds of civilians with us, including women and children.”

The officer, who identified himself as Serhiy Volynskyy of the 36th Marine Brigade, said: “This may be our last appeal. We may have only a few days or hours left.” The authenticity of the video could not be independently verified.

The Russian side issued a new ultimatum to the defenders to surrender, but the Ukrainians have ignored all previous demands.

Altogether, more than 100,000 people were believed trapped with little food, water, medicine or heat in Mariupol, which had a prewar population of more than 400,000.

Ukrainian Deputy Prime Minister Iryna Vereshchuk said the latest effort to open a safe corridor for women, children and the elderly to escape failed because the Russians did not observe a ceasefire. Many previous such agreements have fallen apart because of continued fighting.

Mykhailo Podolyak, an adviser to Ukraine’s president, said on Twitter that he and other Ukrainian negotiators were ready to hold talks without any conditions to save the lives of trapped Mariupol defenders and civilians.

There was no immediate response from Russia.