Russia is racing to stem a rally in the ruble and is poised to accelerate interest-rate cuts as officials increasingly view the currency’s rebound as an economic threat.

The biggest currency appreciation globally was initially touted by the Kremlin as a sign Russia had weathered sanctions over its invasion of Ukraine. But now the gains are giving the government pause, as they bite into exporter competitiveness and budget revenue on oil, gas and other commodities sold abroad.

“The strengthening of the ruble is a matter for the special attention of the government,” he said.

An unscheduled interest-rate meeting for Thursday has spurred expectations for a big reduction — and the possibility that capital restrictions could be loosened further. The ruble initially held onto gains after the announcement, before abruptly swinging to losses of as much as 6.6% versus the dollar in afternoon trading in Moscow, ending a five-day surge. 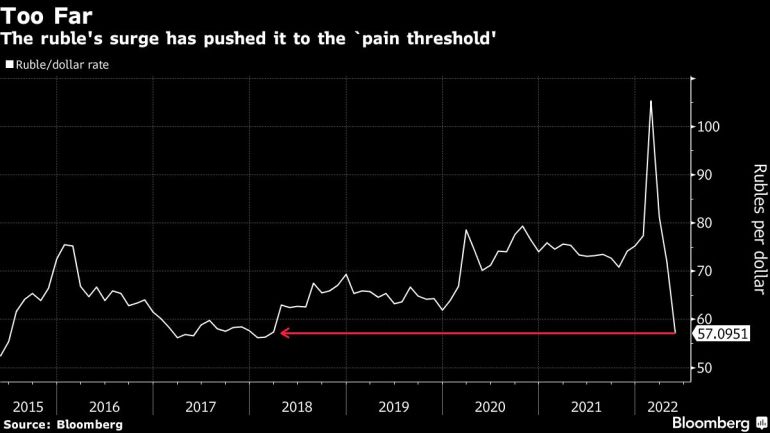 Despite the sweeping sanctions imposed on Russia, surging exports and capital controls have sapped demand for foreign exchange and sent the currency soaring to the highest levels since 2018. Efforts by the authorities to slow the gains, including two rate cuts in April and the easing of key capital controls earlier this week, so far haven’t helped.

The Bank of Russia didn’t comment on the options on the agenda, but officials have said further rate cuts are likely, pointing to inflation that’s slowed since an emergency rate hike in the days after Russia’s Feb. 24 invasion.

The ruble’s seemingly unstoppable rise amid a flood of energy earnings and a dearth of imports are fueling bets for a big cut.

The benchmark is currently at 14%, and TD Securities sees it slashed 300 basis points, up from an earlier prediction of 100 basis points in June. Oxford Economics predicts a 500 basis-point reduction, which would take the rate back into single digits. The median forecast of economists surveyed by Bloomberg is for a 200 basis-point cut.

“There is no point in calling an emergency meeting and announcing it to the market unless they are thinking of a large cut,” said Tatiana Orlova at Oxford Economics. “I wouldn’t even be surprised at a 700 to 800 basis-point cut.”

The decision is due to be announced at 10:30 a.m. Moscow time, but without the traditional news conference, the bank said. The next scheduled meeting hadn’t been due until June 10.

The ruble’s 30% gain this year has taken it to “the pain threshold,” said Dmitry Polevoy of Locko Bank. Still, a rate cut alone “is unlikely to stop the strengthening” because it’s driven by a huge trade surplus, he said.

Policy makers may also use the rate meeting to further loosen capital controls and allow more two-way flows in the currency, according to TD Securities.

“The currency is no longer a free float and the exchange rate mostly reflects trade balance flows mostly due to Russian exports of hydrocarbons,” said Cristian Maggio, head of portfolio strategy at TD Securities in London. “Perhaps some restrictions may be softened on the Russian side.”

The central bank already delivered a bigger-than-forecast cut of 300 basis points at its last meeting in April. It also lowered rates by the same amount at another unscheduled meeting earlier that month. That reversed part of the emergency hike delivered after the attacks started on Ukraine.

“This meeting and the rate cut are a part of the solution, but not the only one,” said Guillaume Tresca, a senior emerging-market strategist at Generali Insurance Asset Management. “They just want to front load the easing and limit the ruble appreciation. It is a pragmatic approach.”

NATO has listed China as one of its strategic priorities for the first time, saying Beijing’s ambitions and its “coercive