On paper, Samsung’s The Freestyle is one of the most complete portable projectors that I’ve seen and one that isn’t afraid to showboat a higher price tag in exchange for quality. It’s lightweight at just under two pounds, runs on the same Tizen OS as Samsung’s TVs, has a 180° tilt for flexible viewing, and features autofocus and auto-keystone for a projection that accommodates any wall. There are plenty of other party tricks under the hood that makes The Freestyle more than just a reliable movie night host. But for this party, you’ll have to pay an entry fee of $899.

I’ve been testing The Freestyle over the past month, and while its hefty asking price remains in question, I believe that Samsung has created a first-generation product that may be one of the most compelling projectors in 2022. 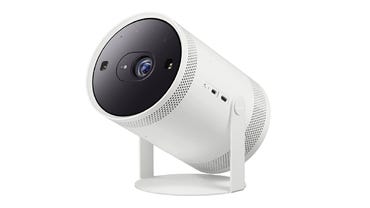 When it comes to portable projectors, companies are challenged with providing a sufficient viewing experience while packaging all the hardware in a small form factor. In doing so, compromises naturally emerge, such as lower resolution outputs, mediocre speakers, and questionable choices in build material. These setbacks, however, are not so present with The Freestyle. Specifications-wise, you’re mostly getting what you pay for.

On the surface, The Freestyle looks more like a stage light than it does a projector, with a cylindrical body that benefits both the form and function of the device.

For one, the rounded sides and lightweight design make the projector very portable. Portable in the sense I could set it on my tabletop, bedside, or the floor, and The Freestyle won’t have issues projecting in an adequate manner.

The projector is shielded by a soft-touch rubber coating, which gives it an added sense of durability while preventing the device from becoming overbearingly hot after hours of streaming. I’m typically against rubber and silicone finishes as the two can attract dust and particles, but the texture here is polished just enough to keep the projector clean to the eye.

The unconventional form factor comes with two major advantages: 180° tilt and 360° speakers. When stationed, you can freely tilt the projector so that it beams horizontally, diagonally, vertically, and anywhere in between. Now, you may be asking, “Why would I want to project video onto a ceiling?” That’s a valid question and one that I sought to answer when testing The Freestyle. In short, the projector can be used for ambience purposes, such as displaying a “Happy Birthday” sign during a party or stars in a child’s bedroom. It also doubles as an $899 smart lamp when you attach the included but optional, light-diffusing lens cap.

There are two rows of speakers that surround The Freestyle, both of which produce Omni-directional sounds at five watts of amplification, and another matrix of speakers on the base of the barrel. No matter how you orientate the projector, you’ll be experiencing a similar sound stage on either side of the room.

Flanking the right side of The Freestyle is a Micro USB-C port to connect the power adapter to, a Micro HDMI port for wired playback, and a switch to toggle the built-in microphone that can dial into Bixby or Amazon’s Alexa. Although Samsung says its external Battery Base — which allows you to use The Freestyle with no strings attached — is coming soon; you can also power the projector with third-party batteries, as long as they support USB-PD and at least 50W of output. Otherwise, the wired power cable will suffice.

The initial setup for The Freestyle took less than five minutes, a record time for any projector that I’ve tested. This didn’t really come as a surprise because Samsung has packed a sensor that is capable of autofocusing, auto-keystone, and auto-leveling the projector, so the hardest part of booting it up was plugging in the power cable. For making new tech that’s accessible and easy to set up, I have to tip my hat off to Samsung here.

What is also worth the praise is how well The Freestyle can resize projections without physically moving. When turned on, the device gives you the option to scale and move the display — from 30 inches to 100 inches — within a 16:9 box. Keep in mind that, unlike traditional OLED TVs that can turn off black pixels, a projector must shoot out light even for darker and unused areas. So if you decide to decrease the scale of the projection, you will still see the grey area that’s not being used.

I won’t go as far as to say that the calibration of The Freestyle is top-notch, though. While the sensor does a passable job at adapting to the distances and angles that I project to, I often have to manually tune the focus so that images look just as sharp on the left side as they do on the right.

A rechargeable remote control comes included with The Freestyle and is the only physical input you’ll get with the media player. There are no buttons or touchpads on the projector itself, which may be a nuisance for some. You’ll find a good variety of buttons on the remote: Standard navigations, volume and channel keys, a microphone toggle, and shortcuts to Samsung TV Plus, Netflix, Disney+, and Prime Video. It also charges via USB-C, the one and only standard that should be used across tech products.

The picture quality on The Freestyle has been phenomenal. It would be a head-scratcher if an $899 projector wasn’t. The single-chip DLP (digital light processing) has no trouble portraying images that are high in contrast and rich in color, and I genuinely had an enjoyable time watching TV shows and movies. It also helps that the cooling fans are quiet while keeping the internals stabilized.

When running a display test (see image below), I found The Freestyle’s color reproduction to be natural and not as saturated as I had expected from Samsung — which is a good thing. It’s worth noting that, like most DLP-based projectors, The Freestyle displays black pixels in a more greyish hue than the pure, ink-like colors of standard TVs.

After manually adjusting the focus, all four corners of the projection had a good amount of sharpness and clarity. And although the projector peaks at a 1080p resolution, it can still downscale 4K content to the point where images look crisp and vivid.

I also tested The Freestyle by watching the premiere of Marvel’s Moon Knight, a show that is packed with fast-panning camera movements, focus-shifting cinematics, and an intense amount of background detail. Experiencing the first episode at night was a perfect choice, with most of the episode taking place in the evening streets of London, the protagonist’s subdued apartment, and an after-hours museum. Even in the darker scenes, I was able to distinguish the various Easter eggs and details in the shadows. One scene, in particular, had a jackal lurking behind ancient artifacts as it was preparing to hunt down the protagonist. All of the action, from start to finish, was perceivable and a thriller to watch.

A projector in a brightly-lit room is the equivalent of turning on a flashlight in broad daylight; You’re better off waiting for the sun to set before using either. In the case of The Freestyle, it handled afternoon viewing sessions as expected, with the 550 lumens of brightness barely able to beat out the sunlight that peaked through my blinds. Does it replace a TV for mid-day entertainment? Clearly not. But if you can hold off till sunset (or have really effective curtains), it’s hard to argue against a 100-inch screen.

The Freestyle operates on Samsung’s Tizen OS, the same software found on the brand’s QLED and OLED TVs. There are pluses and minuses to this. One benefit is streaming service availability, with apps like Netflix, Disney+, YouTube, and more pre-installed and ready to use at the get-go. You can also cast content from your Android or iOS device via Samsung SmartThings and AirPlay 2. In general, Tizen is easy to navigate, has a user-friendly UI, and even curates the shows that you’re currently watching on the home page.

Here’s the thing: The Freestyle can’t keep up with Tizen. What I mean by that is the projector frequently lags and takes an extra second or two to respond to button presses. This was most apparent when I’d boot up the machine and needed to browse through the settings to adjust the focus and keystone. From scrolling through the settings menu to channels and apps, it just seems like the processor that The Freestyle runs on is always playing catch-up with the operating system.

Furthermore, Samsung’s new approach to Tizen no longer lets you navigate around while keeping what you’re watching in the background, so if I needed to change a display setting, I’d have to exit out of the video, open the settings, make the change, and then re-launch the video app.

All of this may be tolerable for you, and I don’t expect it to be a problem for most consumers. But for $899, it’s difficult not to be overenthusiastic about the smallest details.

When Samsung announced The Freestyle back at CES this year, I was mostly intrigued by the various use-cases that were demoed. A digital makeshift window, projection mapping on food, and a smart speaker that doubles as a bedside lamp were all concepts that could be made possible thanks to the portability of The Freestyle.

While I didn’t hang the projector on my ceiling to glorify my meals, I did spend a night stargazing in bed by setting the angle to 180° and playing a video of the galaxy. Paired with the surround sound speakers, my room felt like the perfect getaway after a long week. But of course, you can also just binge-watch The Office or watch TikToks while lying down.

I also threw on the projector’s lens cap to diffuse a spectrum of lights, turning my room into a beaming disco party for one. The LED isn’t powerful enough to function as a standalone light source, but as a mood and color-enhancing duo to your existing lighting, The Freestyle gets the job done.

Samsung’s The Freestyle achieves everything that it has set out to do, bringing a portable and reliable projector experience to mainstream consumers. At $899, I think the first-generation device is priced at $200 too much for what you’re actually getting. But if you want a no-fuss, plug-and-play projector, then this is the one to beat. In a post-pandemic world filled with gatherings, I could see The Freestyle’s versatility and creative use-cases coming to fruition. For now, it remains a tested entertainment system that will make for a welcome addition to any home.

Along with our running list of the best portable projectors, here are some worthy alternatives to The Freestyle: 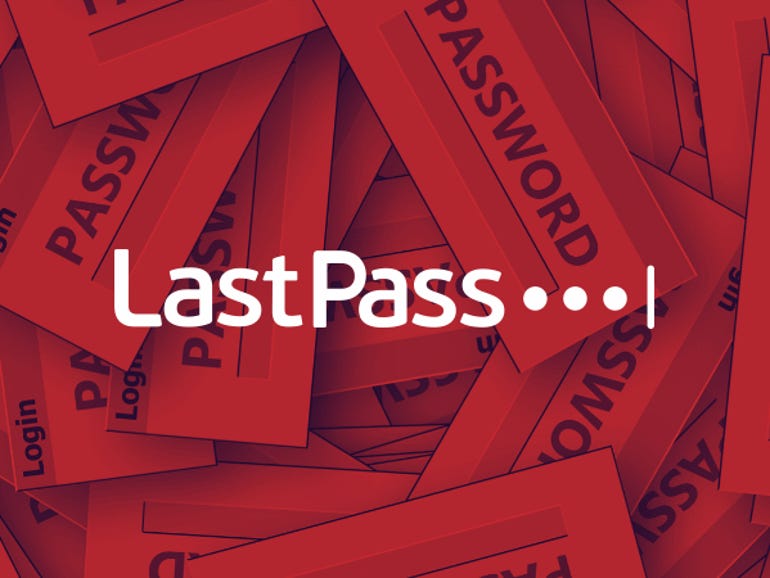 LogMeIn announces plan to spin off LastPass into its own company 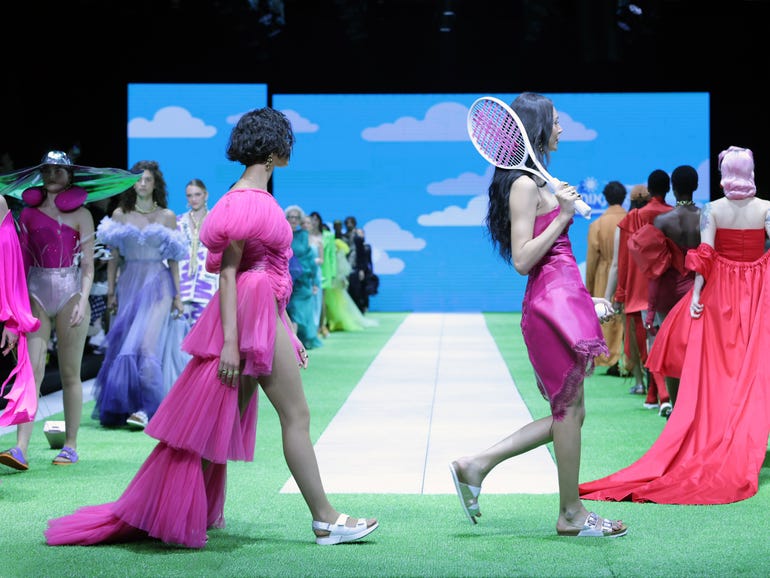 Can technology clean up “fast fashion”?