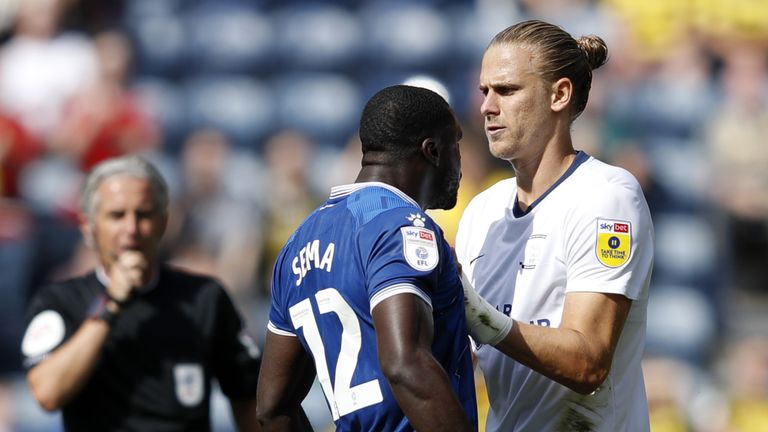 
Preston and Watford both remain unbeaten in the Sky Bet Championship after a 0-0 draw at Deepdale.

The home side had the better of the first half, with Alan Browne and Ryan Ledson forcing saves from Daniel Bachmann.

Vakoun Bayo and Rey Manaj squandered huge chances for the Hertfordshire side either side of the break.

The Lancashire side have now recorded four goalless draws in their opening five league games, while their opponents have drawn all three of their away matches.

Preston manager Rob Lowe named an unchanged side from the one which played out a goalless draw with Rotherham in midweek.

Albanian striker Manaj made his first start for the Hornets following his move from Barcelona in the summer.

The first half was a hard-hitting affair, with tempers fraying between the two sets of players and tackles flying in.

It was the hosts who made the livelier start. Captain Browne swivelled to shoot in the box, but his effort was brilliantly tipped over by Bachmann.

The visitors grew into the game and Bayo almost profited after 15 minutes when a fortuitous deflection put him through on goal.

However, Freddie Woodman stood firm to prevent him getting his first Watford goal before Daniel Johnson went close at the other end with a long-range effort.

Ledson was next to try his luck from range, Bachmann once again called into action to palm the ball away.

The second half began in the same way as the first, with Browne once again being denied by Bachmann.

But the away side had the best chance of the game on the hour mark when Manaj was sent through one-on-one with Woodman.

His finish was wasteful as he fired high into the stand with his left foot to the frustration of the travelling supporters behind the goal.

Watford were beginning to find ways to penetrate a stubborn North End defence looking to keep a fifth straight clean sheet in the league, but wasteful finishing was proving their downfall.

Manaj volleyed over again before Bayo shot into the side netting from an angle after 71 minutes.

Neither side could create further clear-cut chances, despite four minutes of added time, and both had to settle for a point. Frankie Dettori: Inside story of the magnificent seven at Ascot told through those who will never forget | Racing News